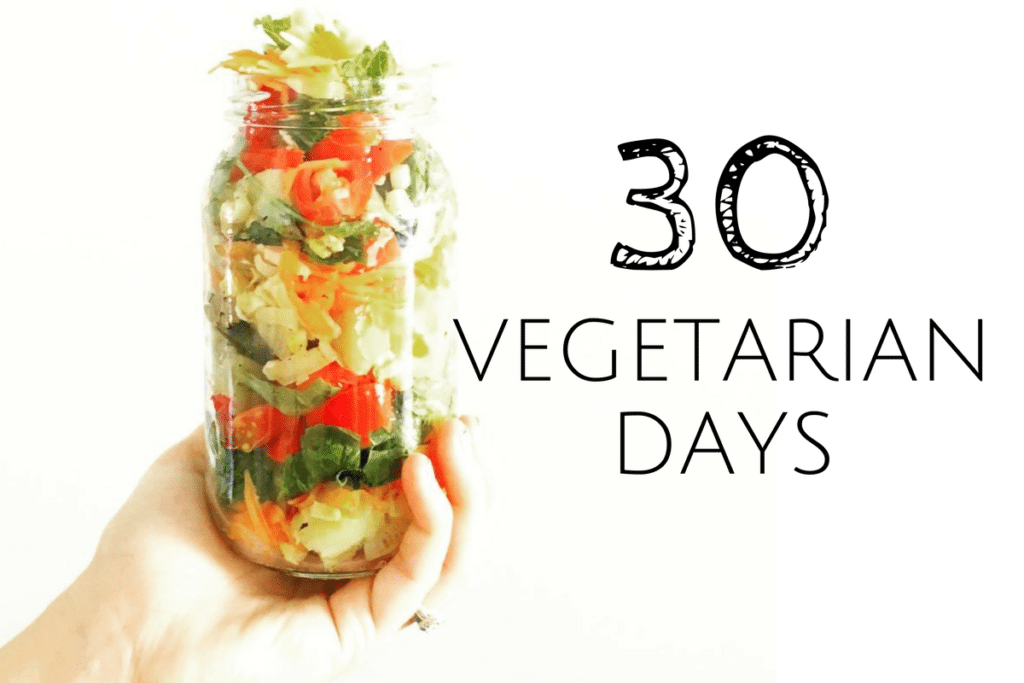 I have a very vivid memory from my childhood that still comes back to the forefront of my mind at times. I’m sitting on a stool at the kitchen bench, probably about three or four years old. Mum hands me my lunch, which is a chicken sandwich. I have been watching her cut the meat off the cooked chicken’s carcass, you know, the kind you get from woollies. I take the lunch, feeling slightly grossed out that I can see the body of the animal I’m about to eat.

This is quite possibly one of the first times I made the connection between the cute farm animals and the food on my plate, although I can’t say for sure.

I must have said something to mum about feeling grossed out, and she laughed and made a chicken noise at me. “braaak-brak-brak-brak” (imagine chicken-noise here). I pushed my plate of food away, ran to my room, and refused to eat my lunch.

So there you have it. That’s probably the only time I’ve ever not eaten because I was upset. Ha.

As a child, I loved eating meat. I also chucked similar tantrums when reminded the meat was once an alive animal. Sorry Mum, sounds like I was a bit of a princess.

The reason this memory is on my mind today is because I just spent a month eating vegetarian. My husband, like my mother, did everything he could to talk me out of it. I’ve mentioned the idea before (in fact, I’ve thought about it for as long as I can remember), but I was always talked out of it. It’s hard cooking vegetarian meals for one person when everyone else eats meat. And then there’s the argument that one person can’t really make much of a difference anyway.


There are lots of arguments for and against being vegetarian, and I’m not about to get into them. I’m sure you’ve heard them yourself, and feel free to do some of your own research. The biggest points that get to me is the fact that in the western world, we eat way more meat than we need nutritionally, which is putting a lot of pressure on the environment – and it’s just not sustainable. Also, I don’t think I could ever bring myself to actually kill an animal – so why do I eat the effects of it?

And so, I decided to trial 30 days of eating vegetarian. 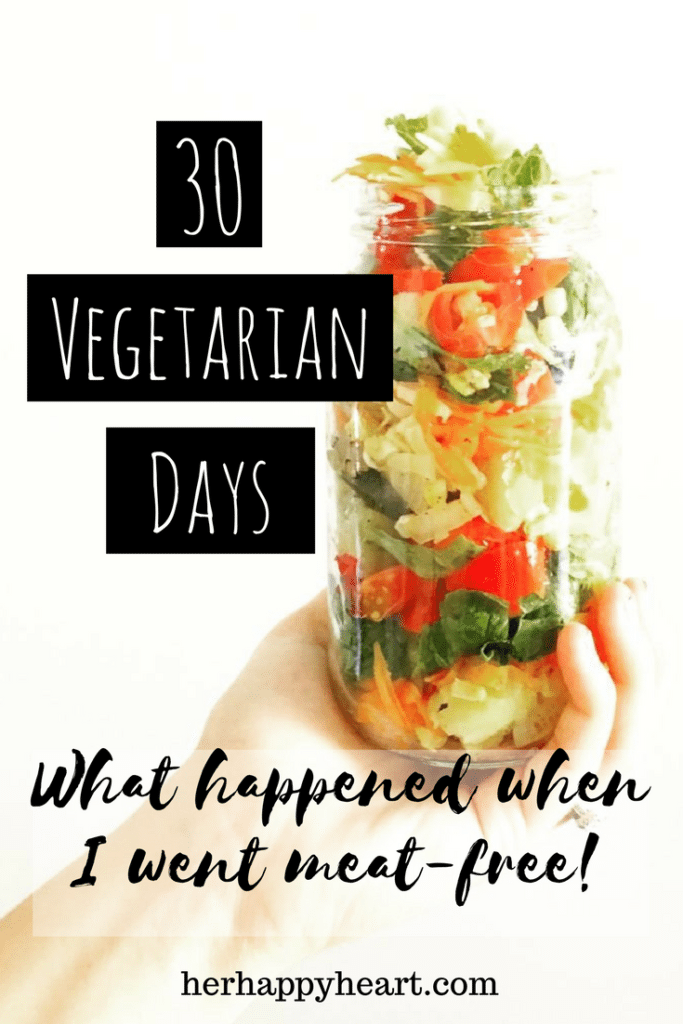 Here are some (honest!) diary excerpts to show how it went: 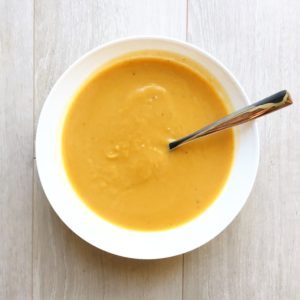 Sunday 5th March – Day one
Ha ha ha wow. I woke up this morning, looked in the fridge, and found a piece of meat lovers pizza that my husband had brought home. I ate it. Cold. It wasn’t until I later got to IKEA and we decided to grab some lunch, that I remembered last night’s vow to go vego. Having already eaten meat today, I felt like I’d already failed! I debated in the long lunch line about whether I would get the tasty IKEA meatballs, or continue on with this vego-trial. I decided to stay strong. I got the vego-balls with a lentil salad, and it was pretty good. But! I have to say, there were hardly any vego choices which was a huge eye-opener. 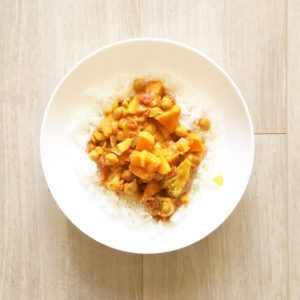 Wednesday 8th March – Day four
The dinner party was a hit! I made 2 meals: One a vegetarian lasagne, and one creamy-chicken and bacon pasta. More of the vego-lasagne was eaten! Fancy that! Luckily I’ve still got a couple pieces left to help me through the week! 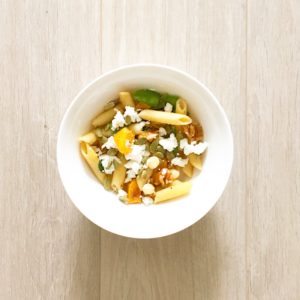 Friday 10th March – Day six
Everything was going so well! Until I went to youth group, without dinner. And I was so hungry, after hours of setting up for a Thank-God-You’re-Here-Night. I smelled the BBQ cooking, and I went and grabbed a hot dog. Ohhhhh man! I didn’t even THINK about it! I messed up, but tomorrow is a new day. 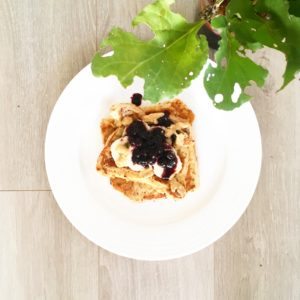 Saturday 11th March – Day seven
Vegetarian breakfast meal check!
Who knew that eating your dinner in the dark could result in you accidentally eating meat? So, I was at a beautiful engagement party tonight, on the river, with fairy lights. Romantic, hey? The food tables, however, were pretty dark. I bypassed the BBQ meat (obviously). I went straight to the salad-table (a safe bet, right? NO!). I realised, when I went back for seconds, that there was bacon in the potato salad. I should have guessed, but I figured that once it’s on my plate, I might as well eat it. There’s no point food going into the bin, just because I’ve decided I’m not eating it. 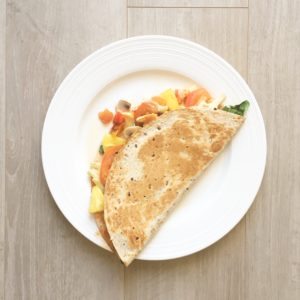 Saturday 18th March – Day fourteen
I spent the past week doing really well meat free, as well as today! Until I got to a friend’s birthday dinner, and everything on the table was BBQ meat, or had meat in it. Except for a salad. But by the time I got to the table, the salad was gone. I did enjoy the BBQ ribs though.

I discussed this on Instagram, about choosing the social over the outrage of eating meat. I think it’s still important to be flexible. I had a friend cheer me on for this, but another expressed their exasperation at friends not catering for their dietary requirements. While I was not upset, as most people don’t know I’m trialing a vegetarian diet, it seemed like a big struggle for her being vego. We need to help a sister out, and try to have meals that are vegetarian, lactose free, or gluten free if that’s what our friends need. In saying that, there are so many dietary requirements that need to be catered for now, it almost makes having people over for dinner too hard! 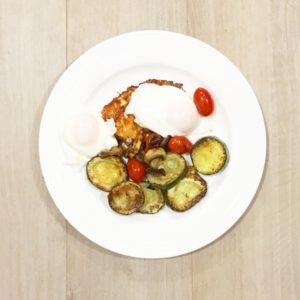 I have since finished the month, with a pretty bad finish. I kind of just gave up, because it got too hard trying to cook vegetarian for myself while still cooking meat for my husband. I couldn’t ask him to go off meat because he has a hard enough time with iron and energy. I just gave up cooking altogether. I stopped preparing meals. I don’t really know what we ate. 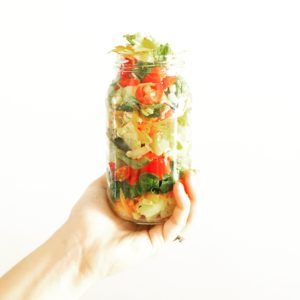 Ironically, the day I decided to forget about being vegetarian, my joy for cooking came back.
I started cooking again. Days later I realised that by chance, I’d cooked a few days worth of meals, all vegetarian. Weird, aye?
Right now I think I’m happy with reducing my household’s meat intake. I’ve decided to try to only cook one or two meals a week with meat, and the rest vegetarian. If someone cooks a meal for me which contains meat, I’m not going to turn it down. To me, food wastage is more important to avoid than meat is, at least at the moment.

I will say this though – vegetarian meals taste amazing. There are so many recipes on the internet, and the less meat you eat, the more vegetables you eat to make up for it. All the pictures in this post are vegetarian and tasted delicious! (See more on my instagram @findingfoodfreedom). 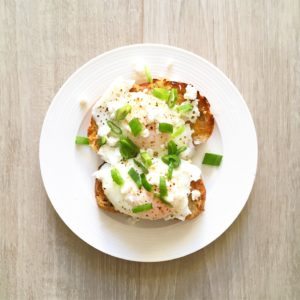 Are you considering trailing a vegetarian diet? Give a couple of our tasty vegetarian recipes a go, and you just might be convinced!

P.S. Just decided what I’m making for dinner tonight – how good do these look?

P.P.S. Just realised I’ve been vego all day today, and I hadn’t even noticed. Go figure! 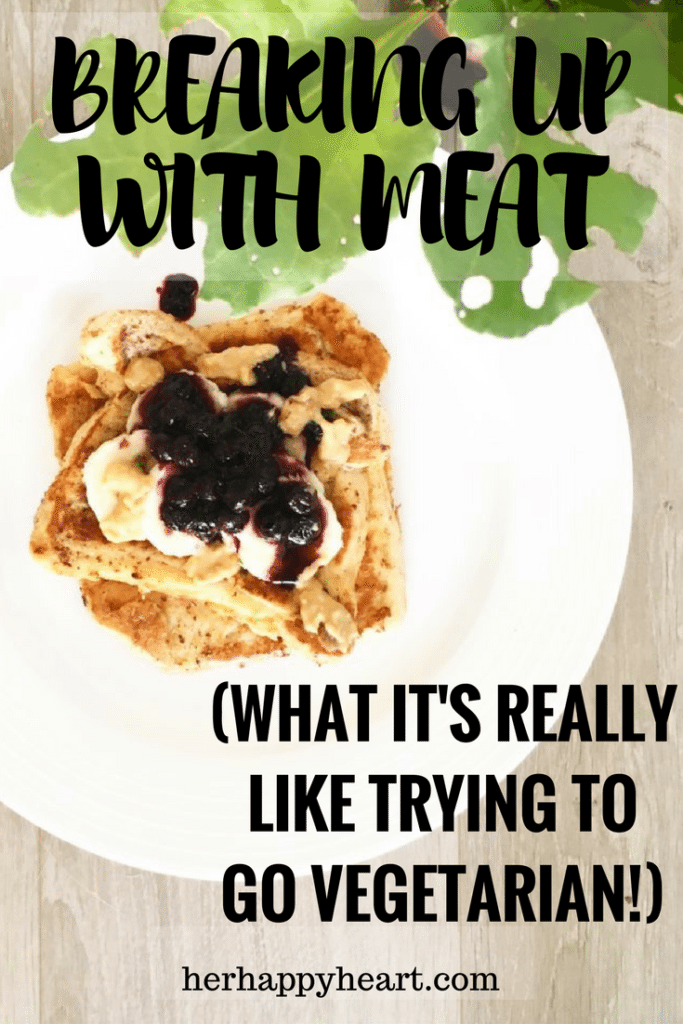 Previous Post: « The Seven Stages of Building a New Home: Part 1
Next Post: Living With A Great Dane Puppy »