I have the torso of a ten-year-old boy and more baby-hairs than what is acceptable for an adult. I’m well aware that I look like I’m 12. However, it was never so obvious to me until after I was married. Are your rings real? How old are you? Is your husband rich or something? But you’re so young! Are you pregnant? Yep. I’ve been accused of marrying for money, being knocked up, wearing fake jewellery and ‘looking too young’ – all from strangers I might add. When people discover we didn’t live together beforehand or have premarital sex, it’s as if I’ve hit the reset button on their brain and they have to take a minute to reboot before they say: …Wow. That’s so… cool.

I was 21, Sam was 23, we were newly married and lived in a granny flat, had terribly paying part-time jobs and were both studying full-time. Two years later, Sam is a full time teacher, I have two part-time jobs and am still studying, we’re long-term house-sitters and everything is pretty peachy. Our house is almost always messy and most nights revolve around Netflix and pizza while I do my assignments and Sam marks year seven science work.

It would be untrue (and very cliché) of me to say ‘I wouldn’t change a thing’ with a faraway look in my eyes and a sickly sweet smile. Yeah, there have been ups and downs and there are some things I would change, but I have never, never ever, ever, regretted the age that we were married.

What I find odd, is that at my age it’s more socially acceptable to have multiple sexual partners than it is to get married. It would seem that we’re considered somewhat of an anomaly. It’s become sort of an unspoken rule in modern society that you should put off marriage so you can ‘play the field’, ‘shop around’ and focus on your education and career. To some, serious relationships are considered an inconvenient distraction. See, marriage isn’t considered the ‘cornerstone’ of a family or a relationship anymore – it’s the ‘capstone’, the final piece. Something you might do once everything else is in order. It’s no longer a foundation for beginning a lifelong relationship, but an accomplishment, a trophy or a reward. Perhaps it’s a way to congratulate yourself on living together for a certain number of years without separating.

According to the Australian Institute of Family Studies, in 1975 the average age for a man to be married was 24, for a woman it was 21. In 2014 the ages were 31 for a man and 29 for a woman. I’m certainly not saying one age is better than another; I’m not against people getting married when they’re older. What I am saying is that people only seem to see the negative side of getting married young. People think we did it out of a sense of urgency or that we rushed into it. Some of my friends have whispered that I’ll regret it later (true story, actually overheard that conversation, it was awkward) and a customer at my work sniggered to her friend that I wear fake rings for attention. Is it so hard to believe that we just love each other a lot?

I understand that if we got married later down the track we would have been more financially stable. We would be more mature, wiser and have a better understanding of the world. I probably would know how to cook way better and maybe we’d keep the house tidier and wouldn’t play PlayStation at all. But what I love about getting married at 21 is that we get to grow up together. Sam taught me how to poach eggs and I taught him how to fold clothes so that they fit in the wardrobe nicely. I actually love that we play PlayStation together in our undies and that we share Age of Empires tactics (always build a wall around your city, guys, always). I love that we’ve both never travelled extensively and we can travel the world for the first time together.

People look at us and think that our age defines our marriage, but our marriage isn’t different because we’re young. We’ve had many trying times together, and I imagine they’re the same struggles that any older married couple have overcome. Sam and I have endured the grief and loss of family deaths, worried over job pursuits, financial struggles, and faced personal battles. We’ve fought, cried, shouted, laughed, danced, teased, scared each other, and brought intense joy to one another. We’re each other’s biggest supporters, encouragers and advisers. We don’t just listen to each other’s burdens; we share in them, take them on and try to conquer them together. I know a lot of people have an ‘I’m a strong, independent person, I don’t need a partner’ mentality. And that’s cool, but it’s never been me. Is it so bad to want to depend on another person? I like depending on Sam, and I like that he has to depend on me. Taking on the burdens of another person is a lot of hard work but it’s also a huge privilege.

People tell me they’re delaying marriage because they’re searching for the right one, their perfect soul mate. Perhaps they are, but I think that view is backwards. I don’t think there is such a thing as the ‘perfect person’. I love Sam, but I hate that he steals all the covers and leaves dirty plates strewn throughout the house. Sam hates that my hair clogs the drains (like, actually so much hair – how am I not bald?) and that I take off my socks in bed and then push them over to his side. Does anything about that sound like a ‘perfect person’? Sam isn’t perfect, but he’s perfect for me, just as I’m not perfect, but I’m perfect for Sam. We became each other’s soul mate after we made our vows and our promises before God. I didn’t marry Sam because he was my soul mate; he became my soul mate because I married him (aw, bless).

My aim isn’t to prove that marrying young is better than waiting; I just wanted to combat the contemporary mantra of “If you marry young, you’ll regret it!” My husband and I married young, and it’s pretty great. We don’t have a fairy tale marriage, but only Disney princesses do. In the future, we anticipate new challenges and joys and accept that there will be things out of our control. We know that we are completely committed to each other and we will grow through those challenges. 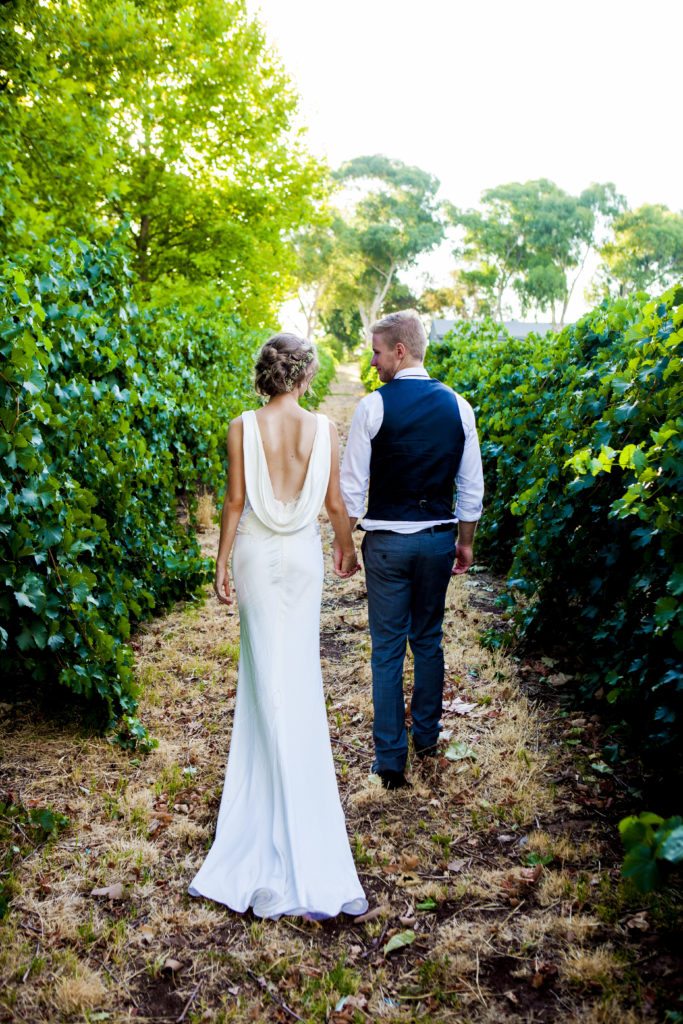 Ashleigh is one of our regular writers and Her Happy Heart's resident artist. You can get to know her over at our "About Us" page!