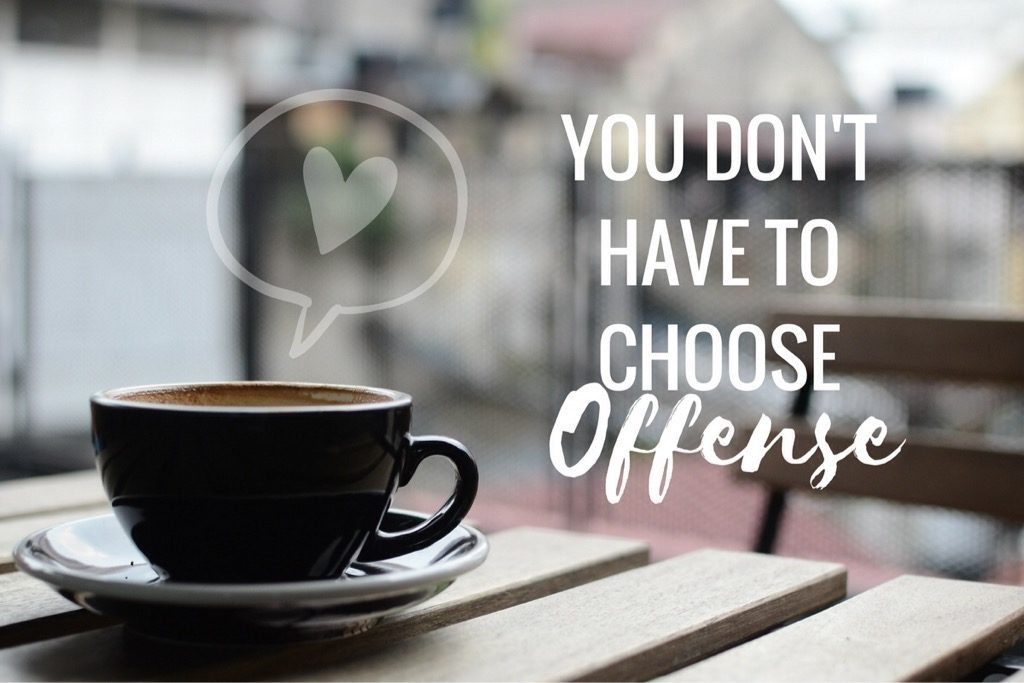 Until seven months ago, I lived a lifestyle sans baby. It was a super amazing season (and by super amazing, I mean that I got to sleep in, have a routine that was based solely around myself and I was able to spend our cash on frivolous things like avocados and coffee). In that season, I also worked as a manager over at a local cafe. I met all types of customers there; the amazingly beautiful humans, as well as the clowns you hear about in other people’s Facebook rants. Of all the people we meet though, the ones that we will always struggle with in life are those who are not like us.

So when I got pulled over by a customer one day, who excitedly asked me, “Oh my goodness, are you pregnant?!“, everything in me stopped. Let’s start by saying this: I was not pregnant. (I have definitely always been on the heavier side so, along with my terrible posture and sometimes poor choice in clothing, I actually truly understood why anyone could be led to believe I was with child. It still stings, obviously, but it wasn’t completely unfathomable.)

And then this happened: I chirpily, and un-angstily replied, “oh no, I’m just fat!” And weirdly enough, we both just laughed and left it at that.

One thing I have learnt from (many, many) odd situations like this is that I have the chance to be offended, like almost hourly. There is always something that someone says (or even just implies), that my moral compass clashes against and, with all of the dignity and strength in the world, I could stand up and say, “EXCUUUUUSE ME, I AM A HUMAN AND NOW I AM WILDLY HURT, I AM NOW GOING TO YELL AT YOU TO PROVE THE POINT THAT YOU ARE AN INCONSIDERATE IDIOT.” Or, equally so, say nothing and just bitterly stew on the angst that says I deserve better. 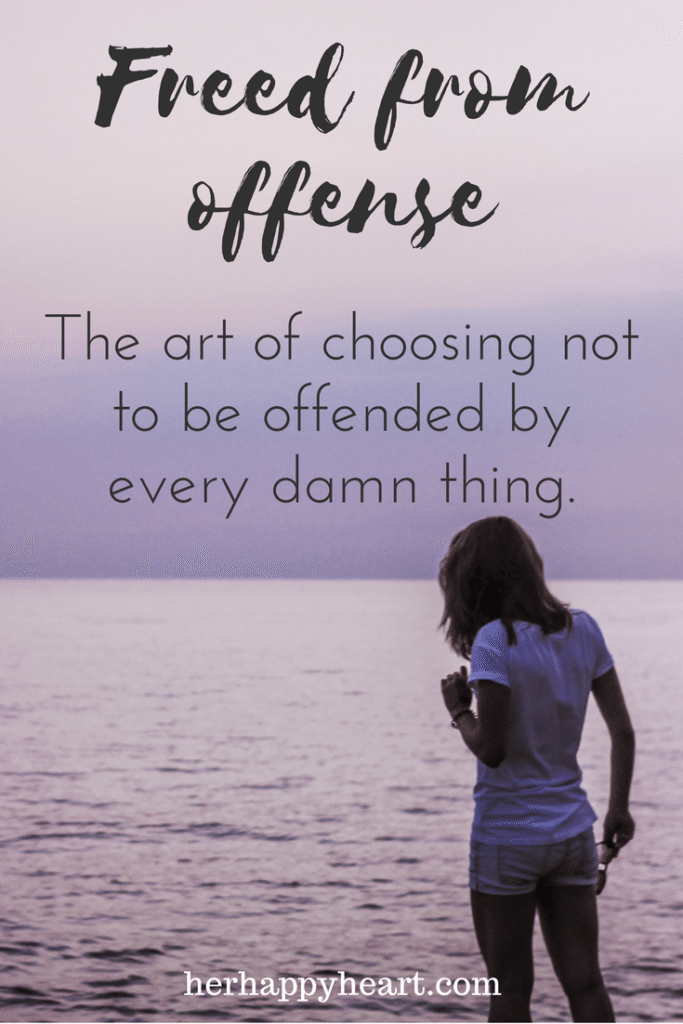 People carry different moral codes, different agendas; they bring their own historic baggage, values and influences into every conversation they have, whether they know it or not. So it is easy to find offense when someone has spoken brashly against your own values or is even just rudely opinionated; it is natural that we are confused and we can easily take offense to the person/statement.

Don’t get me wrong, you are allowed to protect what is within your rights and boundaries. You have the right not to be a doormat to someone else’s intimidation and you can definitely take a stand in what you believe. Also, I understand that there are times where an injustice has been served and it’s important to take a stand up for what’s right.

But, you know, I just don’t think that these integral life-changing Rosa Parks moments happen as often as we think they do.

In the land of keyboard warriors, having rights and being heard, I can’t believe how often I see people jump on the ‘offended response train’ over both big and small issues. Guys, not all people are as disgusted about breastfeeding in public as we think they are. And not all baristas are judging you for your coffee choice (or, at least, the kinder, more professional ones aren’t). And being a woman doesn’t mean that everybody immediately thinks you’re inferior! And if you decide to eat pizza with a fork, you go right ahead!

Even when I mention these subjects, I feel some of you getting offended. I hear ya. I do! I know that we all know someone who has experienced the harshness of that one-case scenario. And isn’t it true to say that we are always going to get the odd few that ruin it for everybody? That’s life, isn’t it? The one kid that calls out in the lesson after the teacher asked for quiet one last time and keeps the whole class back through recess? Yep. There are adult versions of them. (And it’s also important to note that people are allowed to have opinions that differ to yours. Their acknowledgment and handling of these opinions is what makes the difference.)

So what do we do? It is important to acknowledge the base importance of why we feel strongly about a particular thing. We want to feel comfortable feeding our child when we’re out, because breastfeeding is hard but rewarding. We don’t want to have a barista spit in our half-strength decaf hazelnut mocha, because it’s actually just what we like to drink, even if it doesn’t line up with the magical barista code of basic coffee guidelines. As women, our predecessors have fought hard for our rights in things like equal pay and voting rights, because it’s important that as half of the population, we get a say in who runs our country. ‘Pizza with a fork’ people… sorry guys, you’re on your own.


But what I am also saying is that it is important that we all CALM THE HECK DOWN, because we have the choice whether to respond in kindness, or out of the reactive heart of offense. Yes, we do! We have the ability to respond in level-headedness to even the rudest of comments. It’s freakin’ hard – believe me, I know how ridiculously quick our hearts flare up on subjects of importance to us. But actually, it’s completely in our control how we respond to absolutely any type of situation.

I could have totally heard what that customer said completely through my own eyes. That would look like this: “Did she seriously just ask me that? Does she not even consider that I might not be pregnant and instead just big-boned? *ahem* Doesn’t she know you don’t just ask people that?! You gauge it, usually you know the person a little better… and she didn’t even apologise!”

Instead, I recognised that being offended would bring nothing good to the table. She either didn’t know any better and wasn’t meaning anything by it; or, alternatively, she knew exactly what she was doing, and was aiming to be hurtful. Does it matter? It might, but in that moment, I couldn’t guarantee that she was going to feel any differently based on my response anyway; the only person who was going to be almost definitely affected was me. It took everything I had, but I had to step outside of my box of hurt feelings and righteous emotion, and accept that she didn’t have the same moral code as me; she hadn’t been taught any different. Or just didn’t care!

So I chose not to care either, because that would only affect me in the long run. I could deal with the sting of her comment later, but my response to her would reflect the truth of my heart, not my offense. And, to be clear, I could have said something different in response, like, “I don’t know if you know this, but what you said was a bit hurtful, because I really struggle with my weight.” My response was just one version of how the story could have gone. You are allowed to respond – you can always respond if you wish – but the character of your response is what is important.

There’s always two choices: you can exhaust yourself on offense over something that may or may not have been intended; or you can breathe in, breathe out and just accept that not everybody thinks the same as you do, and decide if the conversation is worth it as you practice responding out of the level-headed part of your heart.

Hey, I don’t always get it right (it’s very new for me!); we’re all a work in progress. But I can say that I watch my reaction (and my posture) much more closely now and life is just a little bit sweeter. 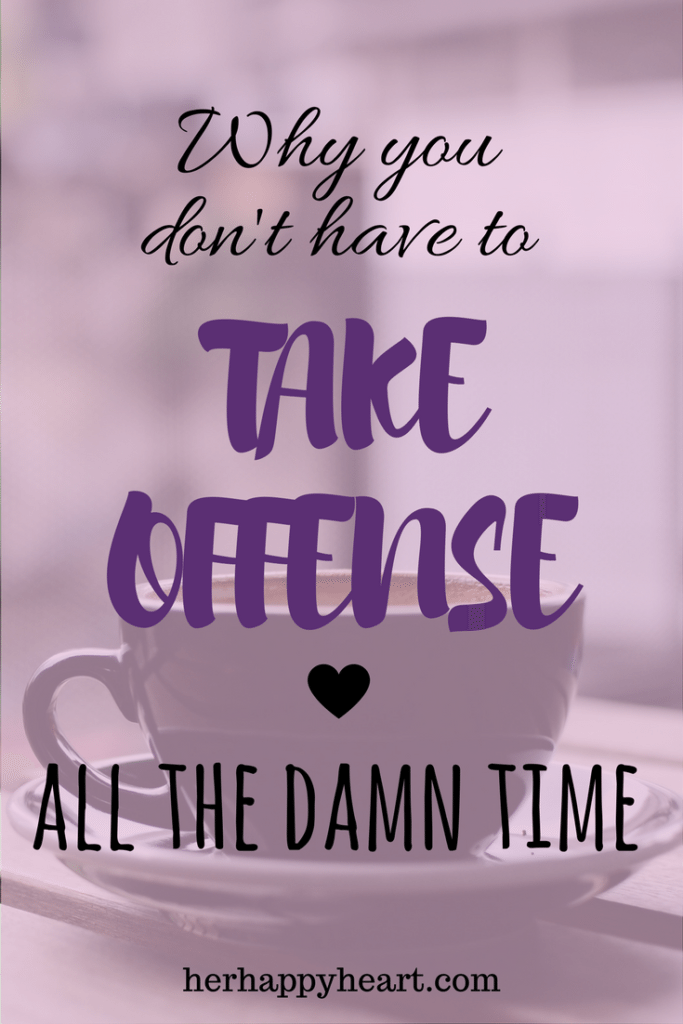