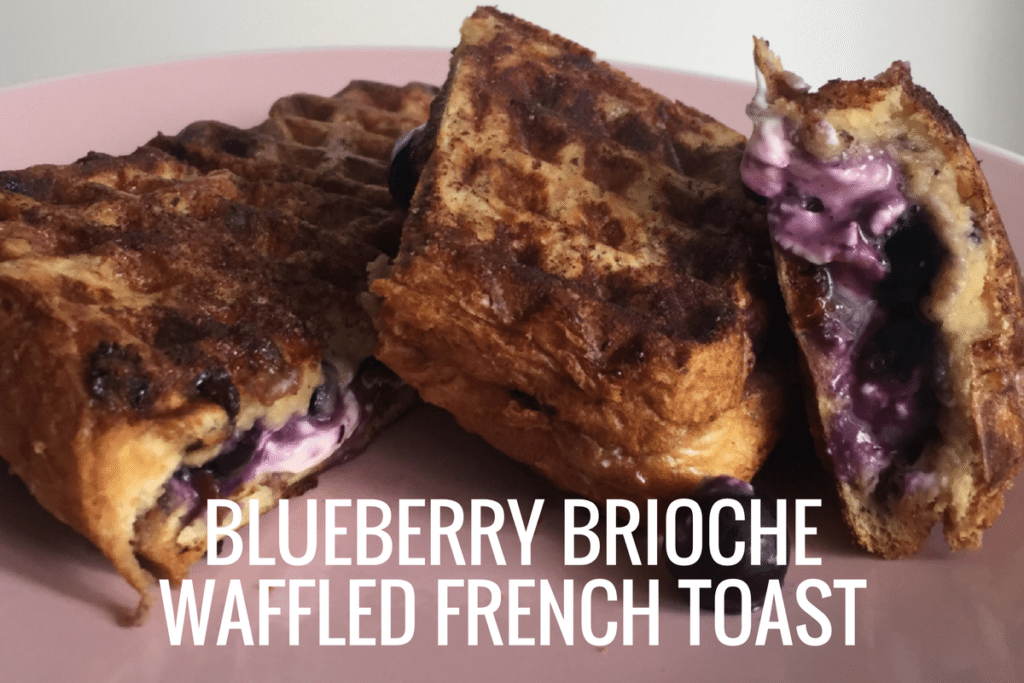 I appreciate household items that serve more than one purpose. The first house we bought, for all that we loved it being a perfect size for two people, had minimal storage space. This meant anything that we owned had to serve more than one purpose, otherwise it had to go. Things that we only used once or twice a year for a specific purpose were cursed in our house, because for the other three hundred and sixty-four days, it just took up valuable kitchen storage real estate.

Then we were given a waffle maker.
Oh, glorious waffles. I could never speak badly of you.

I don’t know about you guys, but waffles hold a special place in my heart. 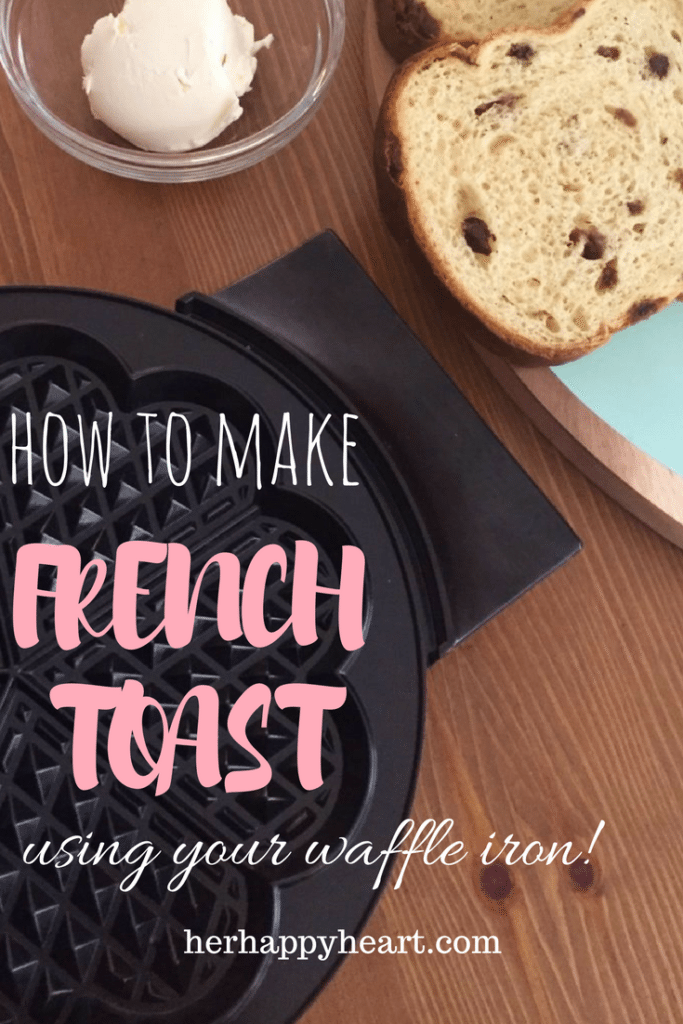 So I knew that if I was going to keep this special purpose appliance, it would have to prove its worth. At first, I just made a lot of waffles. Then, a couple of kilograms later, I realised this was not going to work.


Then I remember one day thinking, “Surely I am not limited to only waffles in this glorious waffle maker.” Lo and behold, when I loaded Pinterest and searched, “waffle maker”, I stumbled upon a whole new world of recipes that weren’t waffles, but made use of this wonderful machine. Brownies. Hash browns. Pizza pockets. Cinnamon rolls. Cookies. The options were endless!

After a short search, I knew loosely what I wanted, and I knew how I was going to make it. So, without any further waiting, here is my current favourite go-to non-waffle waffle maker recipe: 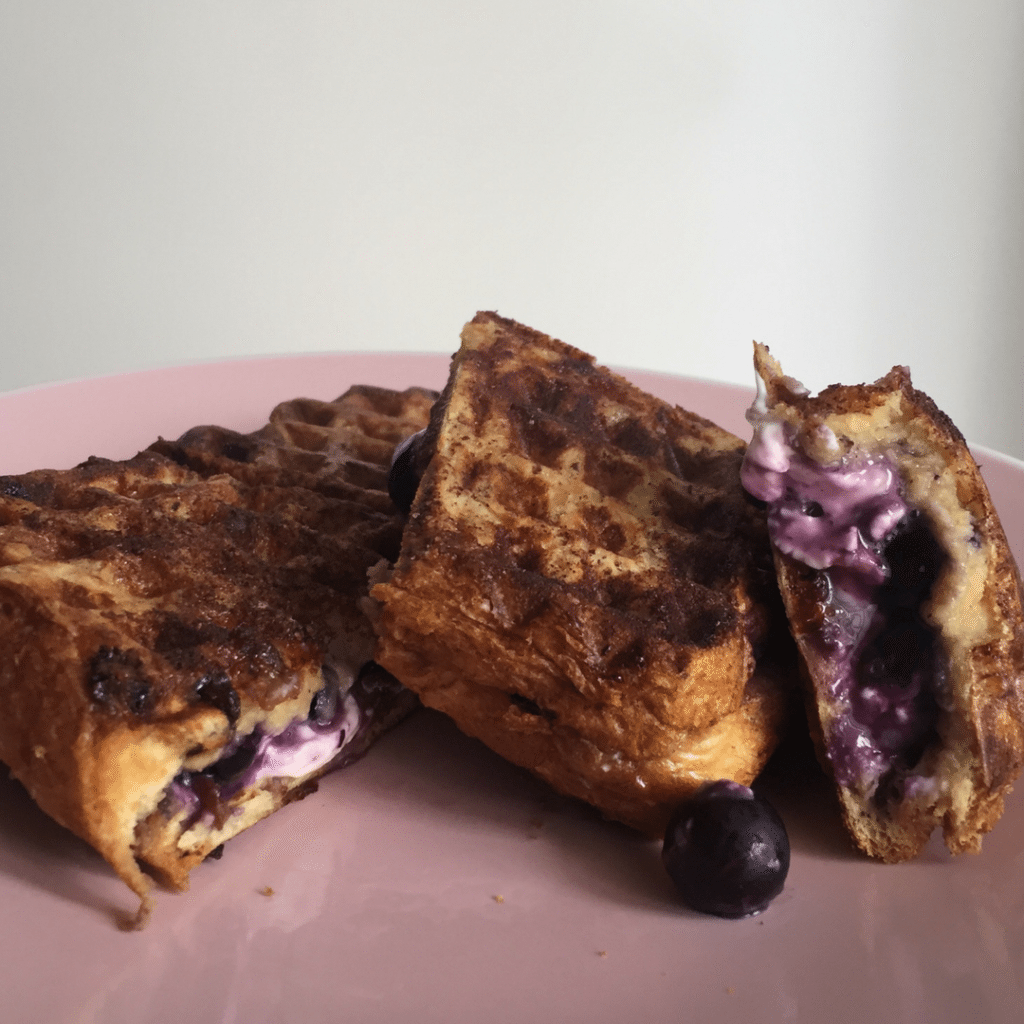 _ Toast of your choice (brioche is pretty much made from unicorn’s tears but truthfully, whatever thick toast you prefer. I’m using a new Tip Top Brioche-style Fruit Toast; less fat than regular brioche but still puts up a good fight).
_ An egg
_ And a splash of milk
_ A serving of cream cheese
_ A handful of blueberries
_ Cinnamon sugar, for sprinkling. Not optional.

So how simple is it?

1. Pre-heat that beautiful waffle-making machine.
2. Whisk together the egg and the splash of milk into a bowl, one big enough to soak a piece of toast in. I made mine two splashes of milk, because I don’t like super-eggy French toast. Make sure it’s really whisked together – no clumpy yolk or egg whites – you want a really smooth mixture. 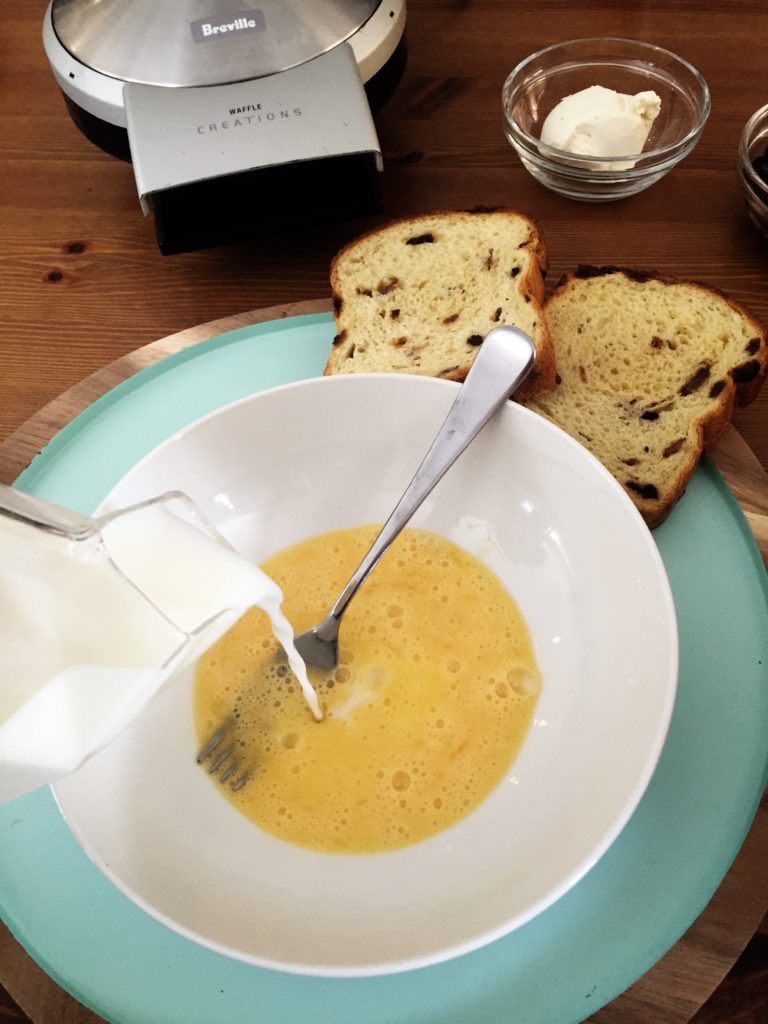 3. Lay your toast in the egg mix, and let it soak up some of the mixture. Press on it a bit, get it covered on that side. Now, DON’T soak the other side. The soaked sides will be the outside of the French toast.
Sprinkle as little or as much cinnamon sugar on the eggy sides of the toast. I’ll always say that because I’m not going to tell you how to live your life. Personally, I could bathe in cinnamon.
4. Flip them both over so the dry sides are face up.
5. Spread one of the sides with as little or as much cream cheese as you wish. 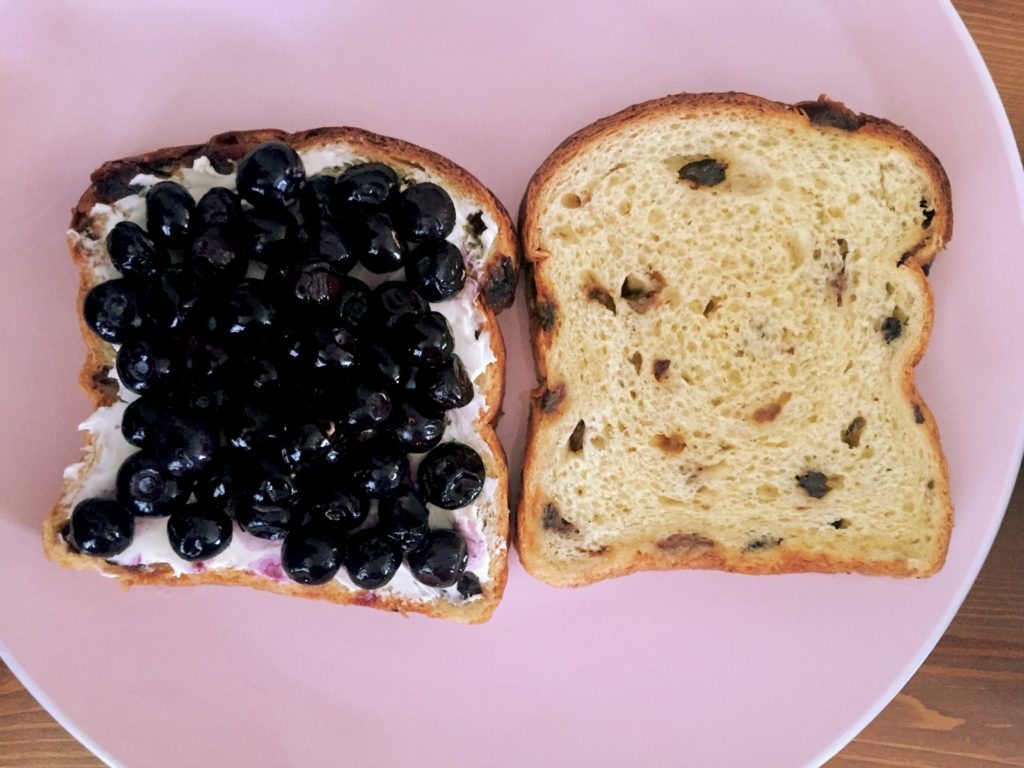 6. Layer the heck out of that cream cheese with blueberries. Some people put a few; I like to cover mine completely, as you can see.
7. Flip the other piece, dry side over, on top of the blueberry/cream cheese mixture.
8. Get it in that terrific multi-purpose machine.
9. Cook the crap out of it.

Pretty easy, quick, cheap and open to a large variety of flavours of your choosing! 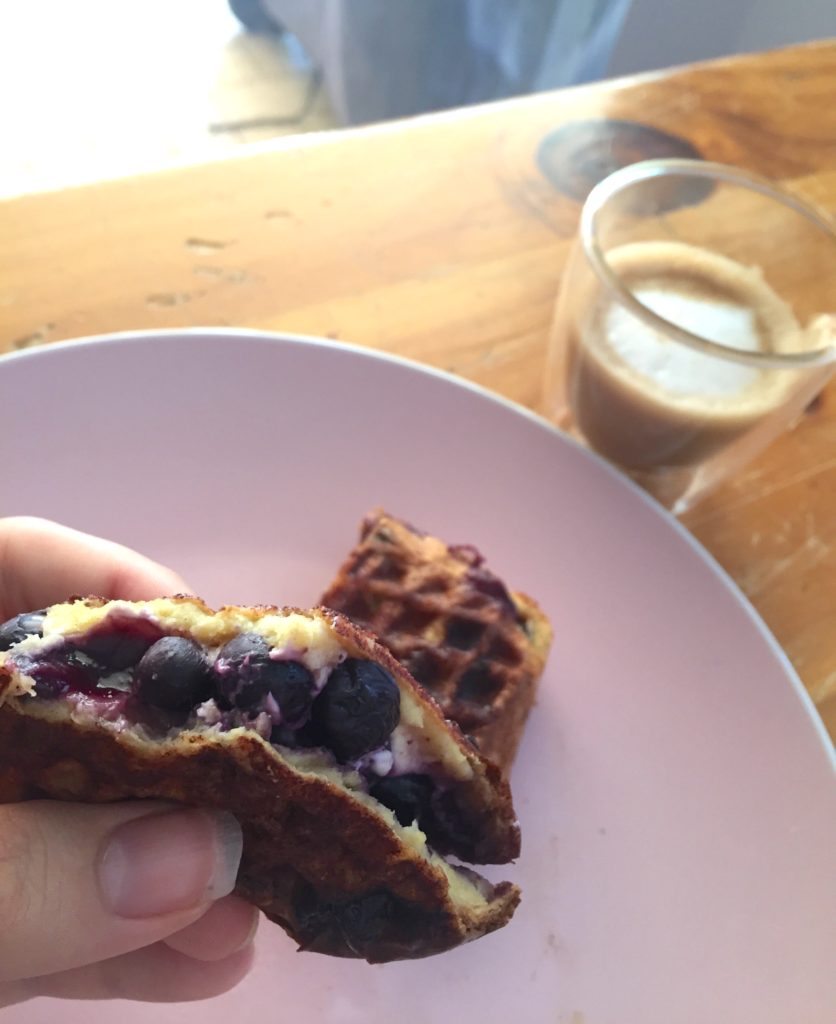 If you want more delicious ideas for using your waffle maker, check out some of the variety through links like these here, here and here! And share with us below your favourite waffle make recipe – or, more importantly, what household item have you been able to squeeze to serve more than one purpose? 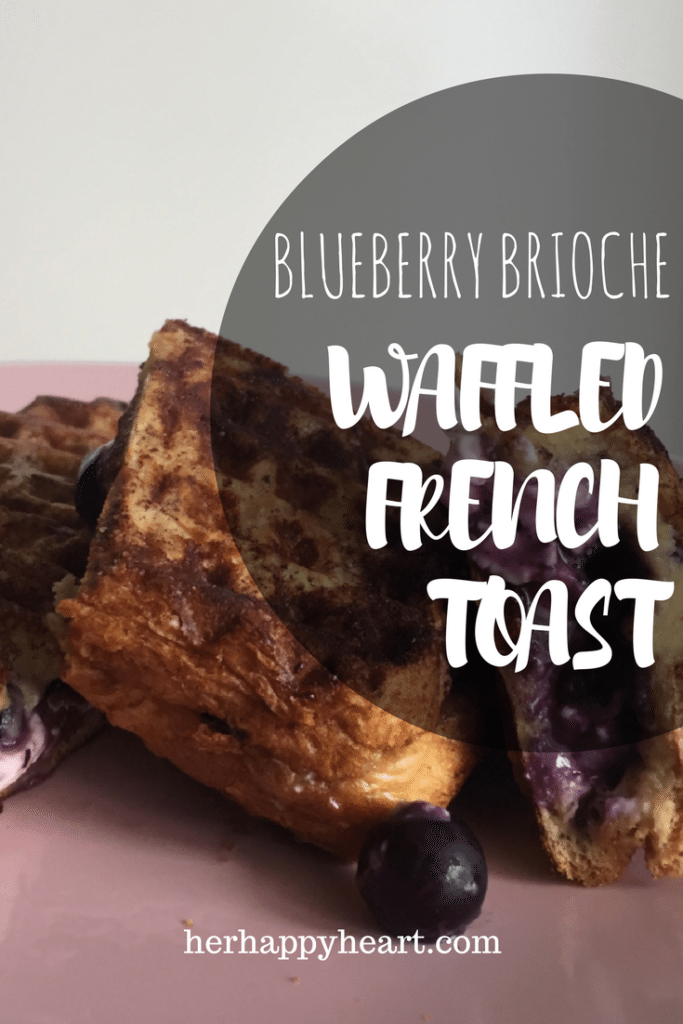 Previous Post: « Indoor Plants That Will Bring Your Home To Life!
Next Post: Ass-kickin’ chilli sauce – can you stand the heat!? »